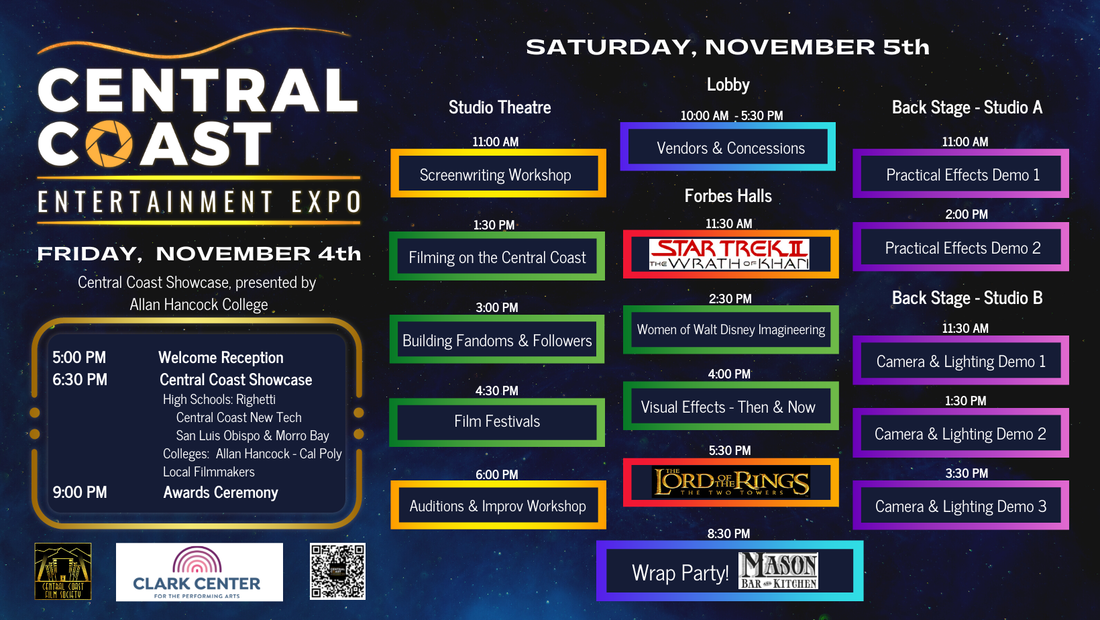 Please check back regularly for the most updated list of speakers, speaker bios and topics!
​

Plus see the very best from our local filmmakers showcase their work in our first Central Coast Showcase.

STUDIO THEATER
Be sure to arrive early for the workshops and panels of your choice in this intimate theater setting. More panels and times will be announced soon.

11:00 - Screenwriting Workshop
This workshop is facilitated by Randi Barros with Cal Poly ISLA and Sally Demarest with the Central Coast Writers Conference.

3:00 - Building Fandoms & Followers
Explore how podcasting, social media, and online communities have taken fandom from a hobby to a year-round, global industry with Ken Napzok (Broadcaster, Comedian, Podcaster) and KC Grims (501st Legion, Obi-Wan Series) plus Jason Kaiser and Katie Neville (MicroHorrors Film Festival).
​
4:30 - Navigating Film Festivals
Come and hear from the festivals themselves on ways to get your work shown! San Luis Obispo International Film Festival Executive Director, Skye McLennan, Cambria Film Festival Executive Director, Dennis Frahmann, and Catalina Film Institute & Catalina Film Festival Founder and Executive Director, Ron Truppa will be there to discuss the film festival circuit.
​
6:00 - Auditions & Improv Workshop
​Join Sabrina Pratt, the Owner and Director of the Central Coast Comedy Theater as she walks you through the audition process, how to land an agent, tips for film & live theater auditions, and the importance of having some improve experience on your resume.
​

LOBBY ATTRACTIONS
Inside the beautiful lobby of the Clark Center for the Performing Arts, we will have our vendors on hand to talk about how you can connect with them in the entertainment industry here on the Central Coast.

HOURS
10:30am - 5:30pm
VIP LOUNGE
Relax in this secluded lounge with snacks, lunch and drinks, and network with the EXPO Sponsors, Speakers, and Industry Advisors.

Dave Hardberger (Visual Effects Panel)
Dave has been working in the film industry since the mid 70’s on such films as CLOSE ENCOUNTERS OF THE THIRÎ KIND, STAR TREK, BLADERUNNER and LORD OF THE RINGS. He moved to the Central Coast in 2007 after living most of his professional life in Los Angeles. He is still working, too stupid to retire, mostly on his own films but is currently consulting on two features. Member of the Motion Picture Academy of Arts and Sciences.

He has actively contributed to the development, support and advancement of the creative community
and industry, serving as chairman and longtime board member of the globally recognized Visual Effects
Society (VES), a member of the Producers Guild of America (PGA) and Society of Motion Picture and
Television Engineers (SMPTE).


Ken Napzok (Broadcaster, Comedian, Author)
Ken Napzok is a broadcaster, comedian, and author of the book Why We Love Star Wars: The Moments That Built A Galaxy Far Far Away. A former host and producer for ScreenJunkies and Collider Video, Ken is the host of the ForceCenter podcast, Pop Rockin' Radio, and Casterly Talk. He began his career as a disc jockey at K-Bear 95 in Pismo Beach before moving to Los Angeles.


Ramey Chanadet (501st Legion)
Ramey Chanadet - Ramey is the Executive Officer for the Southern California Garrison, one of the 501st Legion's largest units in the world. When he's not busy donning Stormtrooper armor for a good cause he is also one of the hosts of "The Dad Batch Podcast" which focuses on the unique intersection of family life and Star Wars costume making.


Katie Neville (MicroHorrors Film Festival)
Katie Neville is a San Luis Obispo local and co-founder of the MicroHorrors film festival. She found her passion for genre films while studying dance at San Francisco State University. Teaching dance, filmmaking, and performing is how she supports her love for the arts in the community.


Bill Bartels (Ventura County Film Commission)
Bill Bartels, has served as the Film Liaison for the Ventura County Film Commission since 2014. Bill’s Organizational Development and Communications practice is deeply informed through decades in city and county government and how the regulatory layers impact film projects, productions and operation.   Prior to the Film Commission, Bill spent 17 years with the City of Fillmore in various roles, concluding his tenure as deputy city manager. Bill served on the Ventura County Planning Commission for 12 years; is a fourth-generation farmer, and lifelong musician. He brings an eclectic background to the job; anchored in systems-thinking and collaborative solutions brokering.


Jennifer Harrison (Santa Maria Valley Chamber & Visitors Bureau)
Jennifer has over 16 years of experience in the hospitality and tourism sectors. In her current role, she provides leadership to the Santa Maria Valley Chamber & Visitors Bureau and Tourism Marketing District efforts. Jennifer performs a wide range of duties, promoting and supporting tourism and hospitality-related business in the Santa Maria Valley. She plays a central role in promoting Santa Maria Valley as a destination for individuals and groups to visit. Jennifer also works in partnership with a network of local businesses and organizations and serves as the primary leader of the community's efforts to build the hospitality sector of the local economy. Outside of work Jennifer enjoys traveling, golf and hiking.


Skye McLennan (SLO Film Fest):
Skye McLennan still remembers seeing The Matrix for the first time at ten years old, the images on the big screen shifting her perspective on the nature of reality and the possibilities of filmmaking. This moment also expanded her thinking, beyond the world of her small hometown of Templeton, CA. Her curiosity and love of film drove her to study Cinema at San Francisco State University and Television Documentary at the Danish School of Media & Journalism. A dual citizen of Australia and the United States, Skye’s next adventure was a move to Sydney, where she worked extensively in production design on short films, features, advertisements, music videos, and documentaries. Throughout her life, she has always worked at film festivals, starting as a volunteer at the SLO International Film Festival in high school. She has also worked marketing, programming and ticketing at the Sydney, Sundance, Tribeca, and San Francisco International Film Festivals. Skye has now returned home, bringing 2+ decades of experience and passion to her role as Executive Director of the SLO International Film Festival.
SLO FILM FEST. Our world-class annual festival in San Luis Obispo County, along with events throughout the year, provide a venue for international and local filmmakers, exposing an ever-expanding range of audiences to new ideas and experiences.


Ron Truppa (Catalina Film Institute & Festival)
Shortly after moving to Los Angeles Ron started his production company, "TRUPPA Entertainment",
creating, producing, writing, directing, and appearing in, award-winning documentaries, TV Shows,
Films, Shorts, Commercials, and Music Videos. His company also began producing film premieres and
events around the Los Angeles area. As A Founder and Philanthropist: In 2010, he founded the non-
profit Catalina Film Institute, highlighting California's only magical resort island right here in Los Angeles
County. The organization's mission focuses on IMAGINATION, EDUCATION and DESTINATION to help
foster the growth of future filmmakers, industry influence-rs, and support the economic growth of the
historic island itself. Ron is proud it has grown to host one of the world's premiere annual film festivals
while expanding its educational reach with the Catalina Film & New Media Summit. Go to:
CatalinaFilm.org.

Chachi Ramirez (Mercy Please)
Chachi Ramirez is a producer with a rich history of working as a filmmaker around the world. Over the
last two decades he’s worked on groundbreaking projects with his agency Mercy Brothers, specializing
in gaming, branded content, documentary and cinematic endeavors. Recently Ramirez worked as the
documentarian on Alejandro Gonzalez Inaritu’s Oscar winning virtual reality film “Carne y Arena.”
Attending high school in a small town on the southernmost tip of Texas, dreams of Hollywood seemed
too far to imagine, but his father, Roberto Ramirez, worked as a NBC News broadcaster and his son
watched his dad on set from a young age. After graduating high school, he moved to Santa Cruz,
California and soon began studying and working as a freelance photographer and videographer in the
bay area. Demand moved him to Los Angeles to produce independent films (The Insatiable, Harvest of
Redemption, Scooter Cannonball), and serve as Head of Production for several original content
departments. Currently he's working on developing a feature film to direct and several documentary
film projects. Outside of the film world, you can catch Chachi working on his 1968 Blue F-250 Truck with
his 2 year old daughter Isla Rose in tow.


Randi Barros (Screenwriting Workshop)
Randi Barros is a screenwriter, film editor, and Cal Poly lecturer. Her feature screenplay, The Chicken
Festival was a 2021 finalist for the CineStory TV Retreat and Fellowship Competition and her television
pilot, Springtime in September was a 2020 semi-finalist for CineStory, the Filmmatic TV Pilot Awards,
and a quarter-finalist for the Final Draft Big Break competition. It was also a winner of the She Called
Action 35 Pilot Contest and produced as a podcast. Randi teaches Screenwriting and Film Production at
Cal Poly University in San Luis Obispo, where she lives with her husband and daughter. She attended the
MFA Film program at Columbia University School of the Arts and recently completed her MFA in
Screenwriting at Stephens College.

Mira Beyeler (Guadalupe Visual & Performing Arts Center)
Mira Beyeler is the founding member of the Guadalupe Visual & Performing Arts Center, the non-profit
slated to operate the Royal Theater in Guadalupe once renovations are complete. After studying Cultural
Anthropology at Sonoma State University, Mira spent a year in India and Israel working for two non-
profits focused on Child Marriage and Sports development – both of whom had the shared goal of lifting
up society’s young and vulnerable populations. Since moving to the Central Coast, she has actively
involved herself in a variety of organizations invested in the area including Los Amigos De Guadalupe &
the Guadalupe Business Association. Her passions involve event planning, community organizing &
working with young adults.


Ian McKay (Student Filmmaker Liaison)
Ian McKay is a student filmmaker from San Luis Obispo currently pursuing a production degree in Los Angeles. He is best known for his award-winning short films, which have screened at SLO International Film Festival, Cambria Film Festival, and the CCFS Student Film Competition, among others; Ian is also a member of the Central Coast Film Society and the Australian Academy of Cinema and Television Arts. Ian is a veteran of the SLO High School digital media program, where he worked in film, television, journalism, and graphic design; he has since become an advocate for film education in high schools and a mentor to other aspiring filmmakers. Outside of film, Ian is an avid performer and writer.